President Akufo-Addo made his reactions known through his twitter handle, saying he has spoken with President Buhari and the president is committed to ending the ENDSARS impasse.

‘‘I join all well-meaning persons in calling for calm, and the use of dialogue in resolving the #EndSARS impasse in Nigeria. I have spoken with President Buhari, who is committed to this end, and has begun the processes that will lead to reform.

Violence, be it on the part of the Police or protesters, cannot be the solution. To the families who have lost their loved ones, I express my sincere condolences, and I wish the injured a speedy recovery.” 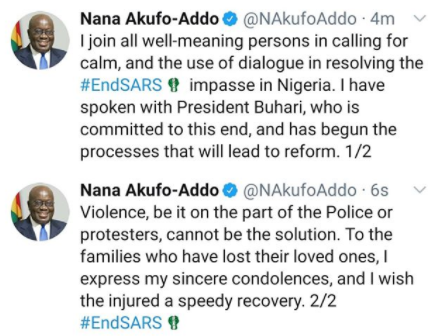 Ghana President Speaks with Buhari, this is the first African president to react to endsars protest in Nigeria.

The endsars protest which has lasted for 13 days now turned worst on the 12th day when hoodlums were said to had hijacked the peaceful protest into a violent one.

In Edo state, prisoners were seen breaking out of the prisons courtesy of the endsars protesters. In Lagos state, several people were shot and killed, while some sustained injuries. Banks and hotels were seen standing in flames in reaction to the army shooting at protesters in Lekki toll gate, Lagos.

Davido Adeleke Welcomes His New Baby With Fiancee, Chioma The …

What You Never Knew About Blessing Ebizi The Law Student …